The article analyzes the monthly change in the rates of national currencies — Indian rupee and Uzbek soum for 2016-2018, which made it possible to draw conclusions about the correlation of the change, the stability of monetary units and to predict changes in the exchange rate of the Uzbek soum.

It is well known from history that each state introduced its own currency for commodity-money circulation within the territory of the country. This brought income to the treasury of the state (in the form of Seenirage) on the one hand, and on the other, it facilitated the exchange of goods between the producer and the buyer through money.

At the present stage of development of the world economy, many factors affect the changes in the exchange rate, which are characteristic only of the modern world: political instability, the global financial crisis or instability in commodity markets and others.

At the modern stage of economic development, the study of changes in the exchange rate is an important aspect of the dynamics of the development of the domestic economy, the study of which reveals the causes of the negative and positive effects of price changes, the balance of foreign trade and other factors.

In this regard, the analysis of changes in the national currency to other currencies is relevant, which served as the basis for this study.

Estimated Change in Indian Rupee to US Dollar Rate

It is necessary to emphasize that the following trends are peculiar for the dynamics of the growth rate of the national currencies of India and Uzbekistan. Firstly, both currencies are rising against the US dollar, although, for a rupee, a relatively low rate is characteristic. In the period from January 31, 2016 to September 30, 2018, the Indian rupees increased by only 6.86%, from 67.85 to 72.50 rupees. While the Uzbek sum for this period has grown almost 3 times, from 2831.5 to 8060.0 soums.

Secondly, the Uzbek soum often had a weakening of the course, while the Indian rupee against the dollar had a wavy tendency. It should be noted that the monthly change in the rate of soum never decreased during 2017, while the weakening (depreciation) of the rupee can be observed 9 of the 12 months of the analyzed period.

The collapse of the sum that occurred in September last year led to a sharp jump in the change in the rate of the national currency unit to other currencies, in particular, to the US dollar. It should be noted that on September 4, 2017, the Central Bank of the Republic of Uzbekistan took the path to the liberalization of the national currency, by abandoning the fixed, to the market rate, that is, the rate generated by supply and demand. The Central Bank announced the exchange rate for accounting for customs payments and other statistical calculations of 8,100 soums, raising it (4,235.10 soums) by almost 2 times.

The highest rates of growth in the exchange rate for the Indian rupee in the period under review were observed in March 2016, a 2.93 percent decline and in May and August of the current year 2.9 and 3.6 percent growth, respectively. Considering the dynamics of the growth rate of the Indian rupee, it can be traced that the subsequent periods, these indicators had an attraction to the average value. 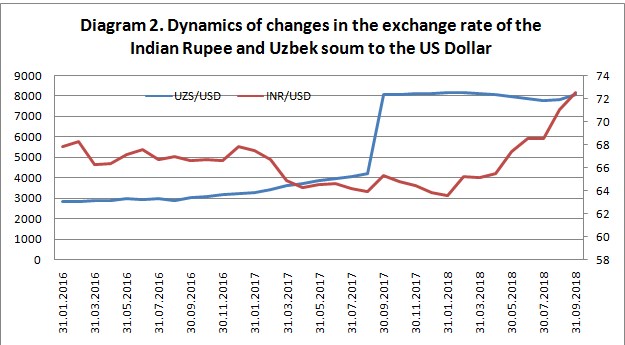 The correlation of data on the dynamics of changes in the exchange rate of the Indian rupee and the Uzbek sum for the period under review (from January 2016 to September 2018) generally showed an inverse relationship of values (Table 3).

The correlation coefficient of the change in the exchange rate of the Indian rupee and the Uzbek sum for the period under review was -0.0055367, which indicates not only the opposite, but also a weak dependence.

The correlation coefficient over the years, calculated with respect to the beginning of the year with an increasing value over the months, also did not allow us to identify a significant relationship between the exchange rates of the Indian rupee and the Uzbek sum.

The denser relationship between the exchange rates of the Indian rupee and the Uzbek sum was traced between January and August 2017, although it had an inverse relationship (the correlation coefficient is -0.9126).

The dynamic trend of changes in the Indian rupee rate does not have a dense linear relationship, which is justified by the value of R² = 0.003. Therefore, a polynomial trend was constructed indicating a good relationship (R² = 0.887). 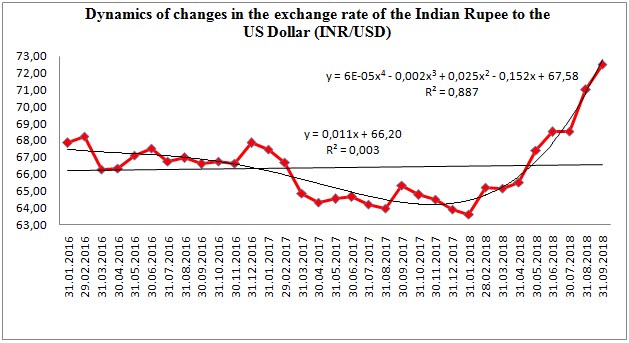 The dynamic trend of changes in the Uzbek soum rate has shown that it has a close relationship with the linear graph (y = 220.0x + 1414,
R² = 0,803), which will determine the predicted values as a continuation of the development trend, as the existing conditions remain.

According to our forecast using the linear trend by the end of December, the amounts relative to the US dollar will be 9334.81 soums.